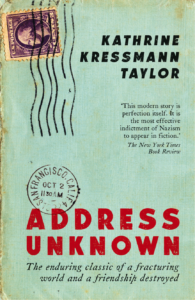 This story was republished to mark the anniversary of the liberation of the concentration camps.

In 1938 the book was considered too strong to appear under the name of a woman, so her publisher dropped her first name, Kathrine.

“Address Unknown” became an immediate literary sensation.  In recent years it has become an acclaimed stage play. It reveals the extraordinary power of the pen as a weapon. Written on the eve of the Holocaust as a series of letters between an American Jew living in San Francisco and his former business partner and dear friend who had returned to his native Germany. It is an extremely powerful and haunting tale of enduring impact, exposing the poison of Nazism.

This memorable story survives an age of racial, ethnic and nationalistic intolerance as a searing current reminder that history can repeat itself.